Wait … a scone? As in one of those plain cakes the Brits nibble on while they take their tea?

Yes, apparently that’s the most “pinned” food recipe among Montana users of the web app Pinterest, according to a recent blog by online food magazine Delish.com. 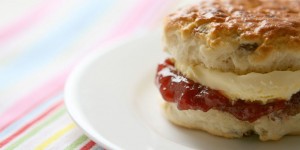 Don’t get us wrong – we do love to pick up a fresh scone on the occasion that we’re patronizing one of Missoula’s incredible local coffee joints.

It helps that the Americanized version of this bread stuff is often sweetened with fruits, iced glazes or spiced with cinnamon.

(For more on that, check out this discussion of the difference between British and American scones, followed by a recipe for brown sugar and oat scones.)

But Montanans are actually baking their own scones?

Turns out it’s not that unusual. We did a quick Google search and found scones listed on multiple home cooking websites based in Montana, as well as several bakeries – Montana Mamas, anyone? – that specialize in the crumbly snack.

At least we’re not “pinning” Chex mix, like the good folks of Iowa (or for that matter, “survival bread” like our neighbors up north in Alaska).

And while you do that, we’re heading to Pennsylvania to figure out what they’re putting in those peach schnapps …