104.5 the U is proud to welcome Johnjay and Rich to the U mornings! Airing Monday through Friday from 5 to 10 a.m. MT, The Johnjay & Rich Show is a non-stop blend of pop culture, news and events, welcoming a wide range of music artists, news makers and celebrities. Joined on-air by Kyle and Payton, the show is a special brand of “reality radio,” in which listeners become an engaged and integral part of the program by interacting with the crew via all forms of social media-Instagram, Snapchat, Twitter, Facebook, email and text messaging. There is never a dull moment for this show with dating segments such as “Second Date Update,” “Hump Day, Dump Day” and “War Of The Roses”!

In addition to hosting their daily radio program, Johnjay and Rich remain steadfastly connected to the community via the Johnjay and Rich #LoveUp Foundation, a non-profit organization that strives to improve the quality of life for the most vulnerable children in our communities, with a primary focus on children living in the foster care system. The foundation’s annual Christmas Wish program provides thousands of dollars’ worth of gifts to deserving families in need during the holiday season. Johnjay and Rich also raised funds for #LoveUp’s sister foundation, #LovePup, by hosting adoption and fundraising events. To date, more than 500 rescue dogs have found forever homes through #LovePup’s ongoing efforts. In addition to serving children and pets, the radio hosts raise thousands of dollars for other worthy causes including disaster relief efforts nationwide. For more information, please visit www.JohnjayandRich.com.

BIG Shout out and thanks to the Johnjay and Rich 104.5 the U morning show sponsors Bespoke Beauty
Find Missoula’s premiere aesthetic medical practice at 2100 Stephens Center and online at bespokebeautymt.com

As a child, Johnjay Van Es always dreamed of being on the radio. He applied for an internship at 91X in San Diego in 1990 and eventually started working in sales for a number of radio stations, but he never let go of his lifelong dream to be on the air. It wasn’t until 1996, after training with the LA-based improv troupe The Groundlings that he would get his first on-air job hosting a morning show on WKRQ in Cincinnati. After just three months on the air, he won the “Best of Cincinnati” award.

A St. Louis native, Rich Berra was captivated by radio at 14 during an afternoon bike ride. After stumbling upon a YMCA-owned radio station, KYMC, he’d found his calling in the studio and jumped on board as a part-time employee. By the time he was 17, Rich was running the entire station, while also working a part-time gig that kicked off his career in morning radio.

A chance meeting in New Orleans found Rich teaming up with Johnjay. The beginning of The Johnjay and Rich era began in 2001 with their first show airing on KRQQ in Tucson. In 2006, the program moved to KISS-FM in Phoenix, Ariz., and was syndicated in select markets nationwide. In 2014, the program joined Premiere Networks lineup of nationally syndicated programs.

Spunky. Vibrant. Outspoken. These are just a few of the ways to describe Kyle. As co-host of The Johnjay & Rich Show, she is queen of the good, the bad and the gossip as she dishes on the latest celebrity news from Hollywood. Listeners also know her as the voice of reason; she keeps Johnjay and Rich in check! 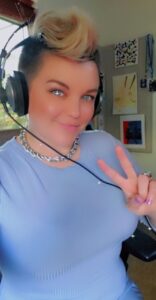 Hey everybody! Aubrey here – your pop music maven. As captain of the good ship 104.5 the U, my goal is to keep yáll entertained with the best mix of today’s top hits, clue yáll into what’s happening in your community and share my love of local businesses. #shopsmall #shoplocal.
I love radio and my infatuation with it began when I  programmed my alarm clock radio to wake me up with Jackie & Bender on KISS FM 106.1 in Seattle.  Music has always been a huge part of my life and is, surprisingly enough, a reason why I made it to Montana. Born and raised in western Washington, I met my husband – a Hamilton boy named Max – in 1999 at the Seattle music festival Bumbershoot.
I’ve now called Missoula home since 2012 – and I couldn’t ask for a more beautiful, community-minded and friendly place to live. That big sky and the big hearts of our community have me smitten.
Some things I love to do: Hang out with friends (shout-out to all you BBOM), cooking up a great meal (I’m a master at chocolate chip cookies and banana bread) watching movies, reading comics, dancing, humming along to favorite tunes, discovering new music and immersing myself in the wonderfully diverse musical landscape of Missoula.

I appreciate you tuning in to 104.5 The U and would love to hear more about YOU, so please feel free to message me direct on our U Facebook page or Instagram

And in the meantime, keep on dancing and singing to your hearts delight!