At its center is two clasping hands – one black, one white; grasping at one another as though Michelangelo had chosen a concert rather than Creation as his Sistine inspiration.

Two women from very different backgrounds finding common healing in the rhythms and sounds of funk and soul.

On the left, the entertainer Sharon Jones: Sparkly-dressed, microphone in hand – she 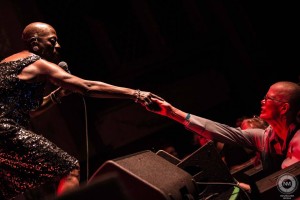 who would succumb to pancreatic cancer just 10 weeks later.

And on the right, another fighter: Missoula’s Susan Blair, who, deep into the throes of her own battle with cancer, showed up at The Wilma that September night to express admiration for a newfound hero.

It happened spontaneously, and it only lasted a split second – yet that’s all a photographer needs to preserve a profound moment for the ages.

“It was a spray-and-pray, I guess we call it – just shoot a bunch. It wasn’t really until I got home that I realized what I got.”

He’s been shooting live performances for years now. But this one, he said, was something different.

“A lot of times the pictures mostly showcase the party of the show, but this one really is a standalone picture that encompasses what Sharon Jones dedicated her life to – especially towards the end of her life,” he said. “Easily the best photo I’ve ever taken.”

You don’t have to know much about Sharon Jones to understand the significance of Neubauer’s image. Her drive to push through recovery and back onto the stage was documented hauntingly in 2015’s “Miss Sharon Jones!”

If you haven’t seen it, cancel your weekend plans. 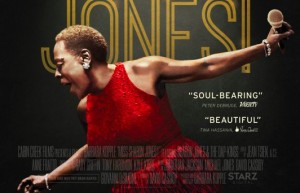 On the surface, “Miss Sharon Jones!” is the tale of a Jones’ emotional and physical struggles through invasive surgery and chemotherapy and the awkward balance of healthy self-care and meeting the demands of band mates, family and fans who count on her for financial stability.

But also, and perhaps more poignantly, it’s the story of the frontwoman’s lifelong struggles against poverty, segregation and a cutthroat industry – an industry that would eventually accept her into its folds just in time for her to assume a new, more deadly, foe.

As viewers, we get to witness the tender balance between Jones’ glowing charisma and tender pains on and off the stage – and the many lives she touched and inspired as she opted against wigs, self-pity and isolation in the face of what would ultimately be her demise. 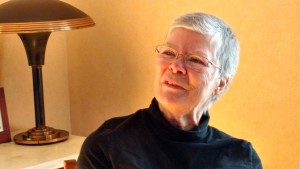 Enter now the 74-year-old Blair, who knew nothing of Sharon Jones until she saw the movie screening at the Roxy Theater last August.

Blair, who lives in a quiet home near the top of the Rattlesnake with her dog, Dora, and her 15-year-old cat, was diagnosed with lymphoma in February and had just completed the final of eight chemotherapy sessions in June.

This was her second battle with cancer; she had her spleen removed during an initial diagnosis 13 years prior.

After the movie, a theater employee told Blair of Jones’ upcoming Missoula show – the first of several people who made this moment between the two fighters come to fruition.

She calls them her “angels.”

“I wrote a note to her the day before the concert – I wanted to let her know how much I appreciated the movie, how I thought she’d been so inspirational,” she said. “It takes some bravery, you know. You either do it or you die, and sometimes you do it and you still die.”

Blair showed up that night with note in one pocket, standing-room-only ticket in the other. And there she stood, alone and exhausted in the back of the room, until she decided it was time.

“At least three people helped me get from the back of the theater to the stage,” she said – again, angels. “She reached out, and I was like, ‘Really?’ and I reached out to her – she was staring right at me,” Blair said. “I can’t tell you what a thrill it was to me. I just have so much gratitude; she didn’t have to do that to me.”

The first time we saw this iconic photo was in November, well after the show and just a week or so after Jones had passed.

Neubauer had posted it to his Facebook page looking for support in an online contest. 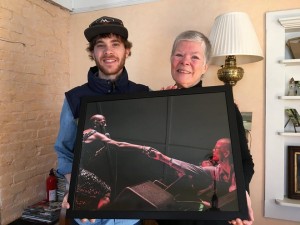 It seemed pretty clear to us what was going on, or so we thought: Blair was reaching out to Jones from the front of the stage seeking strength and solidarity in what was surely the fight of her life.

It wasn’t until we met with Blair in early December that the twist was revealed. It was Jones who was extending her hand, not the other way around.

Was she offering hope and support? If you know Jones’ story, that’s an easy hypothesis to believe.

Or perhaps she reached out seeking hope and support herself? For a strong woman determined to live out her dying days on the stage, that, too, wouldn’t be surprising.

“Maybe she had a need to reach out to somebody,” Blair said. “I just wanted to cheer her on because she is such a wonderful role model. And she had such a hard life, really.”

Beth Eldridge didn’t witness the two women embracing that night, but it doesn’t surprise her that such an emotional display unfolded at what was already an extremely heavy show.

Jones had already announced publicly the return of her cancer, and it was clear her days were numbered. 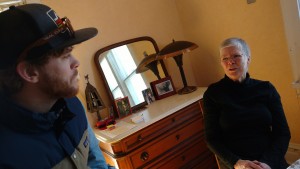 Eldridge, who works as a registered nurse in the oncology unit at Saint Patrick Hospital in Missoula, said the type of connection those two experienced in that moment was perhaps as healing as any drug.

“You can get sort of isolated an lonely in a disease like that – everybody wants to help, everybody wants to do something, but nobody’s really in your shoes or knows what it’s like,” she said. “Just seeing the picture is pretty powerful.”

Aside from her two pets, Blair doesn’t have any family in Missoula. She made quite a few friends during a two-decades-plus stint as a volunteer at the Humane Society of Western Montana. But her closest family – her son, her granddaughter – live elsewhere.

Jones, too, was alone except for a few good friends and her musical partners.

But the funny thing? Because of their grace – that grace that intersected for a moment in September – neither have carried the burdens of disease and recovery all alone.

Doctors, nutritionists, band mates and fans; neighbors, friends, fellow concert-goers – even a movie theater employee and a photographer: The angels were there all along, just waiting to be called.

“It’s one of the gifts of cancer, I guess,” said Blair. “I really think it’s an angelic kind of thing. And if there is a heaven, she’s singing right there along with them.”