For most of our lives, August in Missoula meant one thing and one thing only: Fair season!

Today, however, we experience another less fortunate association when someone mentions the month of August: Fire season.

And while the fair gets better and better every year (free admission, anyone?) it seems like the fires get worse: Earlier breakouts, thicker smoke, more evacuations and, worst of all, increased firefighter injuries and fatalities. 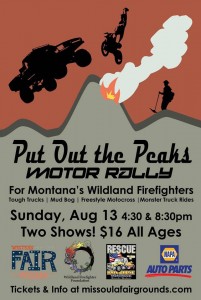 Since the fair dust and fire smoke are already intermingled in our heads and lungs, it only make since we formally lump them in our hearts as well.

With that, we’re excited to announce the annual Demolition Derby will be expanded into a two-event show benefiting the Wildland Firefighter Foundation, which assists families of firefighters injured or killed in the line of duty.

The Put Out the Peaks Motor Rally will still happen in the arena on the final day of fair week, but this year there will be derby’s at both 4 pm and 8:30 pm – and a portion of proceeds will go directly to the foundation.

“Firefighters are risking their lives so we can enjoy summer traditions like the fair,” said fairgrounds director Emily Bentley. “Honoring their sacrifice – and the sacrifice their families make – is the least we can do.”

Attendance will be $16 per show, with each scheduled to last about two hours. You can pick up your tickets in advance HERE.

Or … you can try your luck at a free pair through our Facebook page!

If it would encourage you to invite along a few paying friends – or at least make it easier to put money in the boot when it’s passed around – we’d be more than happy to get you to the show.

Thanks to you for listening, thanks to the firefighters – and their families – for their sacrifice – here’s to more fair dust, and less fire smoke, for all the Augusts to come!