You look at it all the time, but have you ever really seen it?

We’re talking about the fascinating history hiding in plain view across downtown Missoula – from the street names and buildings to the pad of concrete covering what used to provide access to one of the city’s original downstairs barbershop.

Even the old brick coal shoo that heated the shop’s neighboring tenants goes mostly unnoticed by downtown pedestrians nearly a century after its heyday. 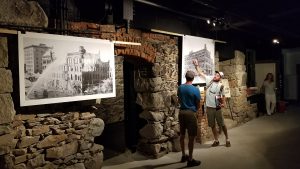 Jon Sand discusses architectural features of the original Hammond building, a five-story structure that burned in the 1950s and was replaced with the current Hammond Arcade at the intersections of Front Street and Higgins Avenue

These stories and relics are being preserved and shared as part of the new “Unseen Missoula” walking tour co-sponsored by Downtown Missoula Partnership, the City of Missoula and the Historic Preservation Commission.

Tour leaders offered a sneak peak of just some of its stops during a trial run for local media on Tuesday.

The project is an expansion of a one-off event last fall that saw more than a thousand participants show up for a self-guided tour said Emy Sherrer, a historic preservation officer for the city.

“It was really successful and really showed people in Missoula are interested and there’s a need for meeting these kinds of heritage tours of our past,” Sherrer said.

Tuesday’s tour included stops at the former Crystal Barber Shop in the southeast corner of East Broadway Street and North Higgins Avenue, just downstairs and around the corner from 4 Ravens Gallery, as well as Missoula Hell Gate Elks Lodge on North Pattee Street and the Hammond Arcade a few blocks down on West Front Street.

In between, tour guide Jon Sand, an intern program coordinator for Downtown Missoula Partnership, used architecture and historical context to weave together the recurring themes of “Unseen Missoula”: timber, the railroad, transportation – and the names of Missoula’s founding fathers, familiar to anyone who uses maps and street signs to navigate town.

Like Christopher Higgins, the namesake of downtown’s most significant avenue and bridge. 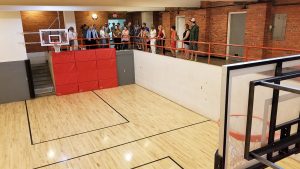 “When the Northern Pacific Railroad came through in the 1890s, (Higgins) wanted the railroad depot to be built at the end of his ‘grand avenue’,” said Sands, beckoning towards the north end of downtown. “That’s why we have that beautiful building standing there today.”

An old photo and the tale tell sign of octagonal flooring tiles are the only lasting relics of the Crystal Barber Shop. The stairs have since been paved over and the shop is now cluttered storage in the gallows of the Dana Gallery.

Also down there: An old bank vault, now filled with art, and a tunnel that once served dual roles as an access point for former bank employees and nuclear-era storage. Boxes of water and stale crackers remain stacked in its musty closets still.

“We believe this was used for accessing the bank parking lot,” Sands said. “And they used the space ultimately for civil defense storage during the Cold War.”

At the Elks Lodge, the story was one of progress and change.

Constructed in 1911, the building was the central social gathering point for Higgins and his associates. But after a remodel and re-dedication in the 1950s, the lodge became the center of regality for all of the region.

“This building more than anything on the tour really exemplifies change over time,” Sherrer said. “A lot of the people who built Missoula were Elks; it used to be extremely regal. We’ve been told in Missoula it was the best meal you could get.” 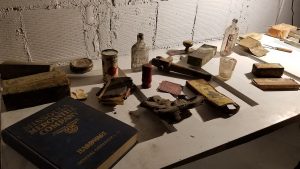 Pictures of familiar names – Eddy, Beckwith, Daly – line the top of the wall of the old stag room, now a converted rec room and bar. In the basement, the gym room continues to house weightlifting equipment; however, the old swimming pool has been transformed into an underground basketball court.

A basement shooting range is sealed and off limits to the tourists; the balcony overlooking downtown, however, is not.

The last stop was the Hammond Arcade, name so after the lumberman Andrew B. Hammond – once a commercial rival to Higgins and, along with Richard Eddy, co-owner of what would become known as the Missoula Mercantile.

Adjacent to the Wilma, the building once loomed five stories tall. A fire gutted it in the early 1930s; Depression-era economics stunted its replacement as the single-story in 1934.

Tour organizers have converted a large basement room into a museum of artifacts and photos from a bygone era – including a makeshift reconstruction of Missoula’s notorious drinking hole, Spider’s Maverick Bar, and several tables displaying posters, artifacts and other items salvaged during the demolition and construction project at the old Missoula Mercantile – and its adjoining canadian pharmacy –last year.

Sand directs attention to a large political poster blown up and situated in the center of the old brick wall. The cartoon depicts an octopus, its tentacles representing the most important commercial and political controversies of early 20th century Missoula; Hammond’s face on its body in the center.

From disputes with Higgins over the location of the railroad depot to business competition with fellow mercantilist Frank Worden, it’s a reminder that success doesn’t always equate with popularity.

“But whatever was going on, whether it was politics or business or real estate, he was there,” Sand said.

“Unseen Missoula” will offer public heritage walking tours every Thursday evening and Saturday morning through the summer, with the choice of two separate but overlapping themes: “Basements & Back Alleys” and the “River Walk Tour.”

Tours are limited to about 15 participants and cost $10 per person, with discounts for children, seniors and military members – both active and veteran.

Click here more information or to register for a tour. You’re also invited to call 543-438 or email info@missouladowntown.com

-story and photos by Zeke Campfield