I know NOT to give my dog small animal bones, dairy, nuts or anything too hard that won’t break down in his stomach. But my Corgi, Tod, like most dogs, is opportunistic and will eat almost anything.  He has taken in crayons, kitty almond roca (cat poo), garbage and dead animals. But when Tod fell ill over the weekend it took us several days before we found the cause, and we were surprised by the outcome.  After three days of not eating, consistent vomiting and three vet visits, an ultra sound revealed a small piece of corn cob in his lower intestines. Surgery followed and now he is recovering. After beating myself up and thinking I was the worse doggy parent in the world by not knowing he ingested a piece of the cob, I decided to look into other foods our pets shouldn’t eat in hopes that my dog never has to go through that pain again. I found a great list of “bad foods” we should never feed or dogs at pededucation.com. This isn’t a complete list; however, my dog has eaten everything on this list at least once, from either getting into the garbage of just from my own stupidity by giving it him. What dog doesn’t love fat trimmings?  Come to find out, corn cobs weren’t even on the list. 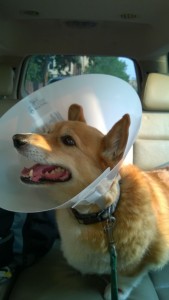 Alcoholic beverages           The leaves, seeds, fruit, and bark contain persin, which can cause vomiting and diarrhea.

Chocolate, coffee, tea, and other caffeine     Contain caffeine, theobromine, or theophylline, which can cause vomiting and diarrhea and be toxic to the heart and nervous systems.

Fat trimmings       Can cause pancreatitis

Raw eggs              Contain an enzyme called avidin, which decreases the absorption of biotin (a B vitamin). This can lead to skin and hair coat problems as well as neurologic abnormalities.

Onions and garlic (raw, cooked, or powder) Contain sulfoxides and disulfides, which can damage red blood cells and cause anemia. Cats are more susceptible than dogs

Yeast dough         Can expand and produce gas in the digestive system, causing pain and possible rupture of the stomach or intestines.

Grapes, raisins and currants             Contain an unknown toxin, which can damage the kidneys. There have been no problems associated with grape seed extract.

Mushrooms          Can contain toxins, which may affect multiple systems in the body, cause shock, and result in death.